The Bystander Effect – What, Why, How – Amenity Lifeline Emergency Response Team

The Bystander Effect – What, Why, How 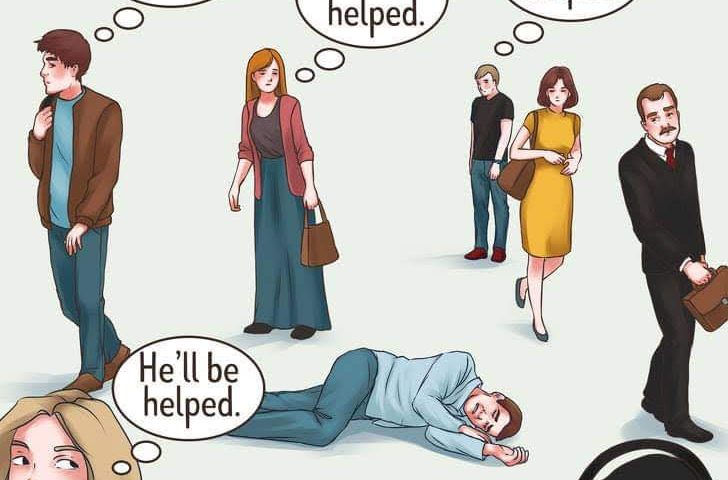 Let’s meet Akshay, his day is about to get much crazier. He’s just finished his college and is on the way home. However, just as he was about to climb into the bus, he heard a loud crash, followed by the smell of burning rubber.

Akshay stepped back from the bus and walked over to the accident site unfolding nearby, which was already surrounded by people. It looked bad, the car seemed to have hit a bike, and the biker looked to be unconscious. While the scene lay before his eyes, he wondered “I should probably try to help” but the moment he tried to take a step, his mind wandered “Wait, if someone else is helping, wouldn’t I be in the way? What would I even do!? What will these people think if I just try to help with no knowledge or training?”

He looked around, no one stepped forward to help, what was going on? It had been fifteen minutes, and no one had moved. Luckily by this time, the ambulance had arrived because the hospital was nearby. And who had called the ambulance? The man in the car who had hit the victim to begin with.

What is the Bystander effect?

What if everyone around Akshay, had similar thoughts? What is this effect that could keep a kind person from offering help? Let’s take a closer look.

The bystander effect is a social effect where a person is less likely to take action or offer help in a situation when they are surrounded by people. We will be taking a closer look at the specifics on what causes this effect, and how to avoid it. Specifics of the Bystander effect.

The bystander effect is surprisingly not a case of human apathy (although it is involved), but rather the product of human social behavior. When a group is present in the event of an emergency without a clear leader in place, the responsibility to handle this event is spread amongst every person present. This diffused responsibility is negligible when each person only feels a small share.

In such a situation, an observer will also be conditioned to behave in a socially acceptable way. This is further reinforced by the fact that since no one has stepped forward or reacted to the situation, people might think it’s not too serious despite how it looks and no action is needed.

The situation is far too chaotic for normal people to have the kind of training one would expect to have. It is not easy to break this when you’re also caught in the same, unless…

How to Avoid the Bystander effect

You already have! It will be much harder for you or anyone to be caught up in the bystander effect if you are aware of the effect when it happens. Another thing you can do is learn first aid from ALERT to take on the responsibility of a First-responder, and you’ll never be a bystander in a road accident ever again!

If you’re the victim and manage to stay conscious, single out a person and ask them to help you. This focuses the responsibility involved and can make a person act to help you, breaking the bystander effect’s hold.

Is it always the case?

The bystander effect is hardly all-powerful. It is simply a product of a lack of awareness and knowledge on how to properly handle certain emergency situations coupled with programmed social norms that must be ignored. If there was only one person in the vicinity, then the bystander effect does not apply and that person will act to help you because there is no one else to share the responsibility. These days, many first responders trained by ALERT at our online First Aid Workshop have set an amazing example. The bystander effect may still be in place, but as more people train to be first responders, less people will fall victim to its effect, especially the accident victim.

So, if you’re dedicated to helping your fellow human and wish to overcome the bystander effect, get your first aid training at ALERT! Join us for our online First Aid Workshop this Saturday, every Saturday. It’s free! Register Now